California is a state of prosperity. We have the largest economy in all of the US. In fact, if we were to secede from the United States and become our own country, we would have the 9th largest economy in the world. Unfortunately, however, we would also be a country dying of thirst. The average American wastes 76-95 GALLONS of water per day, according to the US Geological Survey. The question is, in our water-starved condition, what can really be done?

Of course, there are restaurants only serving water when it’s requested, and even some that are charging for water in our current drought. But saving glasses of water isn’t going to turn the tide. Letting our plants wither and die isn’t going to help either. Unfortunately, no matter how much water we attempt to save by these means, there will still be more water wasted. We are one measly step from a desperation level akin to that of Ted Mosby from “How I Met Your Mother”, attempting to summon rain with a tribal dance on the rooftop. Before you hop onto the roof in your pajamas and beg for rain, allow me to reemphasize that HIMYM is a TV show, and that you’re more likely to catch pneumonia than actually shaking your bonbon until it rains.

If desperately saving water through decreasing restaurant and suburban lawn usage isn’t the solution, then what is? We try to save water by limiting the amount we water our plants and serve in our restaurants, among other methods, but we don’t notice that most of the wasted water comes directly from our ever-convenient lifestyles. Our ten-fifteen minute showers, faucets left on while we soap up our pots, pans, and dishes, and drive through car washes waste more water than all the restaurant served water and metered plant watering combined.

Let’s actually square this down to only one of these topics. Waterless car wash products have been available for several years now, and they require minimal water usage. A spray bottle and some microfiber towels can make your car as shiny as it was right off the showroom floor. Yet, out of convenience, we’ve all allowed ourselves to park our cars into carwashes that can use up to 85 gallons of water in one wash. Furthermore, even if convenience is really so important to us and spending 40 minutes cleaning our cars is really out of the question, why aren’t we using the plethora of eco-friendly mobile detailers out there, many of whom will come wash your car at your home for the same money as a stationary car wash? If we really care so much about conserving water, we will have to be informed about all the methods to do it. The average car wash will go through around 100 cars per day. That is 8500 gallons of water at ONE car wash. Some of the newer, more sophisticated carwashes recycle water, but plenty of them don’t.

If you think of all the water that can be saved by just using mobile detailers instead of car washes, you’ll see that we really aren’t doing nearly what is necessary to truly conserve water. If we would just cut our shower times, only run the faucet when the water is actually being used, and stop using water-draining car washes, we would finally be on the right track to getting out of this drought together.

In recent years, the thus far waning job market has seen a sudden eruption. Finding a job used to require a degree, a number of years in experience on a certain subject, and a nice, juicy resume with all the details of your professional life. But now, as it seems, making a living has become much simpler than that. With a surge of smartphone apps such as Uber and Lyft, you can now make a living driving people around with only a driver’s license and a clean criminal background. Using these apps, people have been able to pay their bills without the need for much education or experience.

But what happens when you’ve been driving for Uber or Lyft for a couple years, and you want to move onto something a little bit more substantial? Get into mobile detailing, apparently. MobileWash, an up and coming app for the iOS and Android platforms, promises to deliver on-demand car washing to the people of Southern California at a reasonable price. But it ALSO allows people who want the comfort of having their own business without the cost and risk of a business to make money. The biggest perk? $66 dollars per wash. Under normal circumstances, it would seem too good to be true. But the structure that MobileWash has built, which allows their contractors to bring home the vast majority of their profits, says otherwise. With a company offering so much potential, it brings to question the value of a typical, entry-level office position. Is the future of career building centered on the contracting of on-demand services? And if so, how will that affect the normal job market? Perhaps the answer to low income is not to increase minimum wage, but to stimulate the job market by adding some healthy competition. 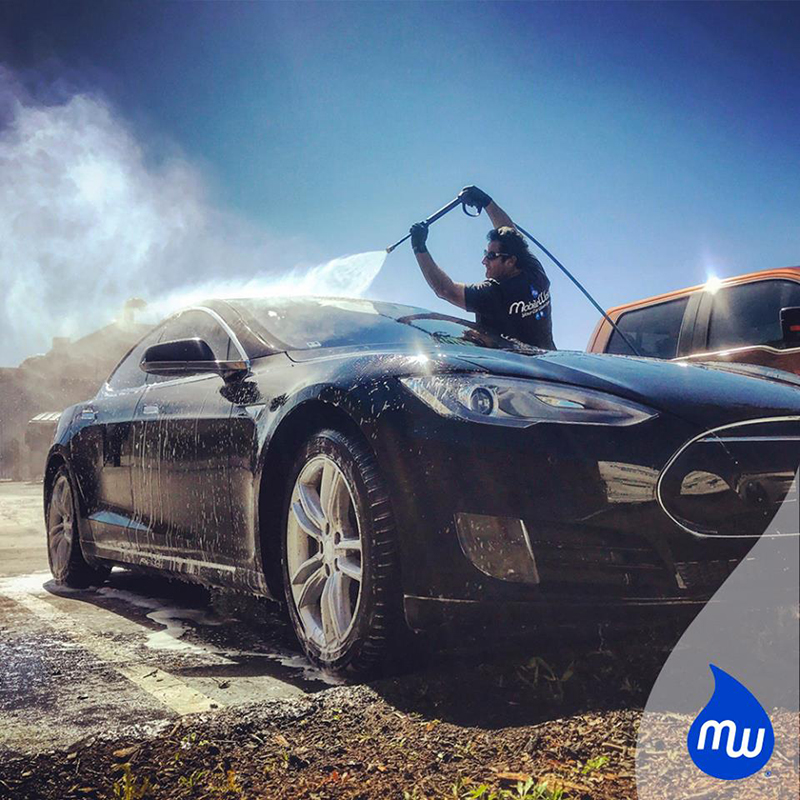 Jack, classic car restorer and longtime owner of a busy detail shop says you should wash your car about every ten days. Here’s why: In a little over a week’s time, your car has accumulated dust, grime, and soil from the road, from the air, and even from those winged creatures above and around you! From the good feeling you have while driving a clean car to the better visibility when your windows are clean to the opportunity, it gives you to troubleshoot any issues, to keeping your car top-notch both in value and functionality, it is well worth your time and effort to do so.

A Clean Car Helps Your Appearance

Whether you are taking someone out on a date or a client to view a house for sale, you will impress your passenger with a car that is clean and vacuumed. As well, getting in and out of a dirty car can get your clothing (or your passenger’s) smudged, especially if you’re wearing white.

You feel much better about yourself driving a clean car, knowing that people may look at you more positively for doing so. Landlords, in fact, tend to look at the cars of prospective tenants to determine how well they will keep up an apartment or house.

Your Visibility is Improved

It doesn’t take long for windows to get dusty and grimy, but a recent car washing helps you to notice your surroundings more clearly when all your windows are clean. Your safety is important. Again, the happiness of your passengers comes into account as they are able to look out through clean windows.

You Stay More in Tune With Your Car’s Condition

Whether you are washing your car yourself or having someone else do it for you, when you have a freshly cleaned car is the best time to inspect it. Perhaps you hadn’t realized that right rear tire is low, there’s a crack in the glass, chip in the paint, or an emblem coming loose. Any of these problems are best dealt with as soon as possible after being noticed.

You can maintain the value of your car with regular washing. For starters, the finish suffers from being coated with dirt and grime. It will deteriorate much more quickly if not washed regularly. It can oxidize (become dull and hazy) or even be pitted and stained from having been exposed to caustic chemicals like a spilled coke or organic substances like bird droppings or tree sap. Regular washing will help to maintain your car’s beautiful finish and, at the same time, prevent you from getting discouraged and trading it in or spending a lot of money on a new paint job.

While the body of your car is protected and made more beautiful by being washed, the undercarriage actually benefits, too! Ever notice your brakes squeaking after a number of hot, dry, and dusty days? Undercarriage washing will take care of that brake dust buildup.

Remember — your best bet is to wash your car about every ten days, to keep it beautiful and protected.

According to USA Today, “California’s desperate water situation has existed since 2007.” The state is now putting into place restrictions aimed at meeting a cutback statewide by 25%. Californians have been affected in a myriad of ways and those washing cars have certainly had to make some adjustments. Residents wishing to wash their vehicles at home face restrictions and risk being turned in by their neighbors, and fined, if not in compliance. One would think those car washing businesses, auto detail shops, and dealerships would be adversely affected, too. They are, but if they have spent the time and money to make their systems much more water-efficient, they are probably faring even better than one would expect. This is how the drought is affecting L.A. car washes.

As of July of this year, State Water Resources Control Board in Sacramento approved rules allowing a fine of $500 for those residents hosing down sidewalks or driveways, wasting water on lawns, or using a hose without a shutoff. Considering that the average car washer at home uses from one hundred to one hundred twenty gallons each time, it is clear that, with a water shortage, this consumption is wasteful. As well, residents may not wish to bring attention to themselves even if they are being careful. Would they be better off, then, going to a car wash or a dealership?

What Changes Have Been Made by Car Washes to Conserve Water?

Businesses washing cars with outdated equipment are the ones suffering from restrictions on their consumption right now. Even before the drought, their older systems would have been costly regarding the expense of the metered water used. Investment in a recycling system with pumps and holding tanks would have paid for themselves, by savings on utilities, in a matter of months.

Many car washes and detail shops are actually exempt from the state’s restrictions due to their use of recycled water. They have become quite efficient in their water usage by:

In 2017, the worst drought in 1,200 years was devastating California, driving farmers to the brink of disaster.

Actor Don Cheadle meets a family of farmers whose lives may never be the same as they struggle to find water in the parched Central Valley.

How is Dealership Car Washing Affected?

Many auto dealerships offer free car washes to their new car customers. Some have had to give alternative incentives to those same customers, give them coupons for a nearby car wash, or let them use their free car wash coupons as credit towards service on their cars, instead. These would be the ones who have not retrofitted in order to become more efficient. A car dealership, having gotten their car washing equipment up to date would benefit not only by being able to honor their free car wash incentive promises but also having the ability to, onsite, keep their inventory spotless.

MobileWash car detailers provide their own deionized water and pressure washer to conserve the amount of water used in addition to time efficiency. The service providers on the MobileWash platform will arrive at your location fully-equipped with all the supplies they need to ensure that your vehicle is spotless, including a generator for power supply. There is no need to provide water nor power like other services; service providers bring everything needed for the service to take place.

UPDATE: As of January 3, 2020, California Water Supply Looks Promising. In early December, rains reduced the portion of the state considered to be abnormally dry from 85.3% to 3.6% in just a week. “It’s still too early to predict what the remainder of the year will bring in terms of snowpack,” Sean de Guzman, chief of the agency’s snow surveys and water supply forecasting area, told the Los Angeles Times.